The Heath Senior Center kicks off its Movie Matinee series with a sea-faring tale that is based on the true story behind Herman Melville's classic "Moby Dick."* The movie tells the story of the whaling ship Essex that sailed in 1820 from Nantucket to the Pacific ocean, where it was attacked by a sperm whale and sank, followed by the harrowing tale of the survivors. The movie is rated PG-13. It was in theaters in 2015 and the DVD was released for sale in March 2016.

Call Eileen Tougas (337-8558) for more information about the movie or the event, or see the poster at the Senior Center.

* Licensing regulations forbid the disclosure of the movie title, character names, producer, or studio name in any promotion outside of the Senior Center.
Posted by HFPL at 2:57 PM

Spring is in the air 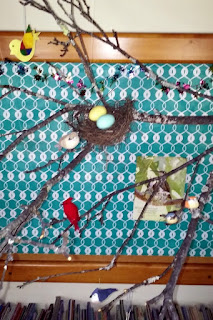 It must be spring: the birds are nesting in the apple branch in the children's area of the library!

Stop by and pick up a gardening book, a new novel, or a DVD to relax with after a busy day out in the fresh air.