A new book in the Heath Free Public Library collection:  Flora White: In the Vanguard of Gender Equity by Linda Morice. 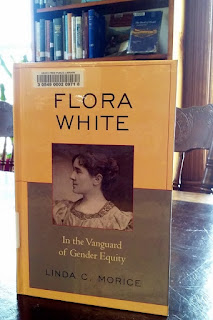 Flora White  was born in Heath, her family's home for four generations, on April 4, 1860. She had a difficult early life, a remarkable career in education, and she returned to Heath in her later years. She died on February 14, 1948, and is buried in the South Cemetery in Heath.


Flora White: In the Vanguard of Gender Equity draws on a collection of personal papers (only recently made available to scholars) to present the life of a colorful New England educator who lived from the Civil War to the Cold War. Throughout her career, White worked to promote the physical and intellectual growth of girls and young women beyond the narrow gender stereotypes of the day. Although White’s name is not a household word, this book represents a newer form of biography in which the life of a lesser-known individual serves as a lens for understanding larger social and cultural developments.

In Flora White’s case, this newer biographical approach produced findings to inform research in both educational history and gender studies. For example, White’s papers correct some longstanding misconceptions about the origins of the progressive education movement and the role women played in it. White’s sources also shed light on the complicated relationships of educated (but marginalized) U.S. women and the prominent men who mentored them. In addition, White’s papers show that--in order to protect herself from those who might find her words objectionable—she used coded language (such as poetry) to counter sexist stereotypes and advance her desire for a fuller life for her students and herself. Although, upon her death, a newspaper obituary praised White for being recognized by “men of note” in educational circles, her efforts to promote the physical and intellectual development of girls and women helped to create opportunity that is still unfolding today.